From October 18 to October 27, USCET Chairman Ambassador Nicholas Platt, Founding President Ambassador Julia Chang Bloch, Chief Operating Officer Ye Sheng and Special Advisor Robert Kapp made a productive and invigorating visit to China for a series of six carefully planned engagements with some of USCET’s best and longest-standing Chinese partners. This busy itinerary confirmed and strengthened many of USCET’s deeply rooted cooperative relationships, helped to introduce USCET to new actors in the complex Chinese environment; opened contacts with a range of younger Chinese scholars in key fields; laid the groundwork for future USCET programs with China; and did full credit to the generous commitments of the organizations and agencies whose strong financial support made the entire week’s activities possible.

At various points, the USCET team was joined by Susan Thornton of Yale Law School, former Acting Assistant Secretary of State for East Asian and Pacific Affairs; Dr. Thomas Fingar of Stanford, former Deputy Director of National Intelligence and former head of the Bureau of Intelligence and Research at State; and veteran businessman James McGregor, the well-known author and chairman of APCO Worldwide -Greater China.

USCET’s principal effort throughout the visit was both to argue the case for people-to-people and educational exchange activities between the US and China, precisely because so many other key elements of the bilateral relationship seem currently to be in danger of irreversible damage, and to offer to well informed Chinese counterparts a set of well grounded, unofficial, personal American perspectives on the challenges now corroding bilateral relations.

See the linked post for a full discussion of the fellowship launch.

Though the event centered on a theme of “Public International Environmental Law in the United States,” Ambassador Bloch more broadly addressed the legacy of FY Chang. As she illustrated, at the dawn of China’s modernization, Chang made use of his Harvard education (acquired through the Boxer Indemnity Scholarships) to fight for China’s place on the world stage, successfully regaining tariff autonomy for China and nationalizing its customs service. For him, there was no contradiction between learning from the US and building a more prosperous China. He dreamed of his homeland’s rise as a modern power, while still embracing positive relations with the United States. Such an example has never been more relevant.

The lecture by attorney Lester Ross, Chair of both the Policy Committee and of the Insurance Forum of AmCham (American Chamber of Commerce In China), stimulated serious and broad ranging commentary and discussion. Environmental law is a domain still fairly insulated from inter-governmental friction, making it an excellent field to develop cooperation between legal scholars in both nations.

Since its creation in 1988, the FY Chang Scholars Program has helped almost 80 Chinese law students attain a Harvard education. As Ambassador Bloch summarized,“during these difficult times in US-China relations, the FY Chang Scholars program and the annual FY Chang Lecture are needed more than ever – to keep the channels of communication and contact open and to extend the legacy of Sino-American understanding and cooperation bequeathed by the Boxer Indemnity Scholarships.”

On the morning of October 24, the USCET team arrived at the University of International Relations at the invitation of UIR Assistant President Da Wei to participate in a roundtable discussion on the 40th anniversary of the normalization of US-China relations, and on the future of this relationship. Joining Ambassador Bloch and Ambassador Platt were USCET Special Advisor Robert Kapp, Dr. Fingar, and Mr. McGregor. Offering Chinese perspectives, in addition to  Professor Da Wei, were, Zhao Minghao, senior fellow at Fudan University’s Institute of International Studies; Xie Tao, Dean and professor at Beijing Foreign Studies University’s School of International Relations; and Li Wei, professor at Renmin University.

Participants from both countries prepared for this encounter by reading several concise articles, two by Professor Da Wei on American approaches to China and one by Harvard’s Arne Westad on the drivers of current Chinese global behavior against the background of the US-Soviet Cold War experience.  Westad’s Foreign Affairs article, intentionally titled to remind readers of George Kennan’s seminal 1947 article “The Sources of Soviet Conduct,” treats China as an “empire” and analyzes the future of Sino-American relations by comparing them to the Soviet-American Cold War that began after World War II.  Da Wei describes the “growing anxieties of a United States that has been contemplating its own weaknesses against a young and ambitious challenger,” and dwells on the perception in China that US seeks to cap China’s rise with a “glass ceiling,” much as Japan encountered in the 1990’s. The speakers further delved into the possibility of protracted ideological struggle between the two nations in the 21st century.

The frank, at times nuanced, discussion at the UIR meeting was an encouraging reminder of scholarly energy.  The extent and richness of bilateral interactions over four decades was clear to all, even as both sides recognized the inevitable differences of perspective that have come with changes in global power relations – and with demographic and generational changes.

USCET continued the day’s events by joining AmCham China members for a brisk dialogue on the role of people-to-people exchange in the US-China relationship, with particular focus on the ongoing importance of educational relations between the two countries, in a time of pervasive deterioration of other ties.

Traditionally, discussion about the US-China relationship turns on trade, politics and security.  The dimension of the relationship driven by NGO and civil society actors is usually an afterthought.  Despite this, as an organization deeply integrated with both American and Chinese communities, AmCham China recognized that the current deterioration of relations between China and the US vests people-to-people ties with new importance. The economic benefits to the United States arising from, for example, the presence of hundreds of thousands of Chinese students at American colleges and universities bears re-emphasis.

Throughout the discussion, Ambassador Bloch emphasized that ongoing friction in the US-China relationship must not be allowed to “spill over” into the people-to-people realm. With so many facets of US-China cooperation in dire straits, the value of durable personal relationships can hardly be overemphasized.

On October 25, USCET’s special guests Susan Thornton, Thomas Fingar and James McGregor joined the USCET core team at a symposium on “Understanding Strategic Distrust: The Future of US-China Relations,” at the Central Party School (CPS).  This meeting, the seventh USCET-CPS gathering in Beijing, sought to examine how the US and China have reached their current degree of antagonism, as well as to assess what each side must do to stabilize the relationship.

In a session chaired by Liu Jianfei, Director of the Institute for International Strategic Studies, Susan Thornton and Zhou Qi, Professor and Director of Global Governance and Development Research Institute at Tongji University offered keynote addresses, providing observations on “origins of and solutions to” the problem of US-China strategic distrust. This was followed by an in depth morning and afternoon of exchanges on particular facets of this distrust, beginning with “Economics and Trade: Toward Collaboration or Confrontation?” and “Present and Future Security and Technology Challenges,” and continuing with “Public Diplomacy, Education and Exchange” and “The Future of US-China Relations: The Way Ahead.”

Neither the visiting USCET team nor the Chinese hosts who welcomed them were under any illusions about the deterioration in bilateral relations that currently dominates the headlines and besets the daily activities of those who work in the Sino-American arena.  At various points, Chinese interlocutors expressed concern, uncertainty, disappointment or dissatisfaction at the turns that Sino-American relations have taken, particularly since 2017.  In turn, The American visitors on many occasions emphasized the seriousness of the ongoing deterioration in relations, which has now begun to affect people-to-people work, educational exchanges, and cultural exchanges in addition to the more obviously visible problems in the economic and security areas.

Nevertheless, the event was distinguished by the absence of pre-digested lines of discussion or argument. A consistent theme throughout the day’s conversation was the need to balance competition in technological development, security posturing, and trade with lingering undercurrents favoring US-China cooperation. As Ambassador Bloch mentioned, “our relations are nearing a dangerous tipping point, tested as never before. But here we are again, together, indicating that regardless of the relationship between our governments, people-to-people relations endure.” Evidently, today’s steadily worsening relations need not preclude heartfelt dialogue.

For the final event of the October trip, USCET celebrated the 40th anniversary of Beijing Foreign Studies University (BFSU)’s American Studies Center. A consistent partner in every American Studies initiative that USCET has launched since 2004, BFSU’s commitment to mutual understanding between the US and China serves as a heartening case study in the value of educational exchange. Special thanks were given to Professor Mei Renyi, whom Ambassador Bloch characterized as “China’s Dean of American Studies.” Professor Mei has been indispensable in the success of USCET’s American Studies Network (ASN), where he has contributed publications, facilitated the hosting of conferences, and promoted participation from students.  In light of this, the celebration also marked the launch of the Professor Mei Renyi American Studies Foundation, which hopes to extend Professor Mei’s expertise on American society to the next generation of Chinese scholars.

Speaking broadly to the value of BFSU’s efforts, Ambassador Bloch posed the question of whether American Studies in China can “tackle not only the differing perceptions and experiences of history and culture, but also address the intractable differences rooted in our political systems and values.” While the remarkable success of BFSU’s American Studies Center lends itself to a conclusive “yes,” much work remains to be done before such goals can be realized.

Perhaps the most important product of the USCET visit was an important reminder:  China is a vast and variegated landscape.  Its scholars and researchers in fields relevant to USCET’s work maintain a wide range of thoughts, opinions, hopes and expectations.  Dialogue on related issues, among Chinese specialists themselves, is spirited and surprisingly visible to the eyes of foreign visitors. The dialogues revealed, sometimes explicitly and sometimes implicitly, that both countries have their prides and their doubts, not only as to the intentions of the other side but also about the future of their own national trajectories.  Along with the frustrations and the sense of foreboding that both sides recognize at the present time, there remains not only hope but a degree of optimism that what the US and China have built over four decades will prove a durable enough platform to sustain the two countries as they navigate the uncertainties ahead.

Those uncertainties are not mirror images of one another; the intensely public playing out of America’s domestic dramas of course is not mirrored in China, and indeed the situations within China that likely contribute to the worsening of bilateral ties are not identical to the stresses gripping the American system.  But the ultimate conclusion of a week of USCET programs and meetings in Beijing – ‘’it’s complicated” – should be taken as encouraging news.  As our Chinese friends remarked on more than one occasion, USCET has done much, but USCET still has much to do.

Additional Photos from the Trip: 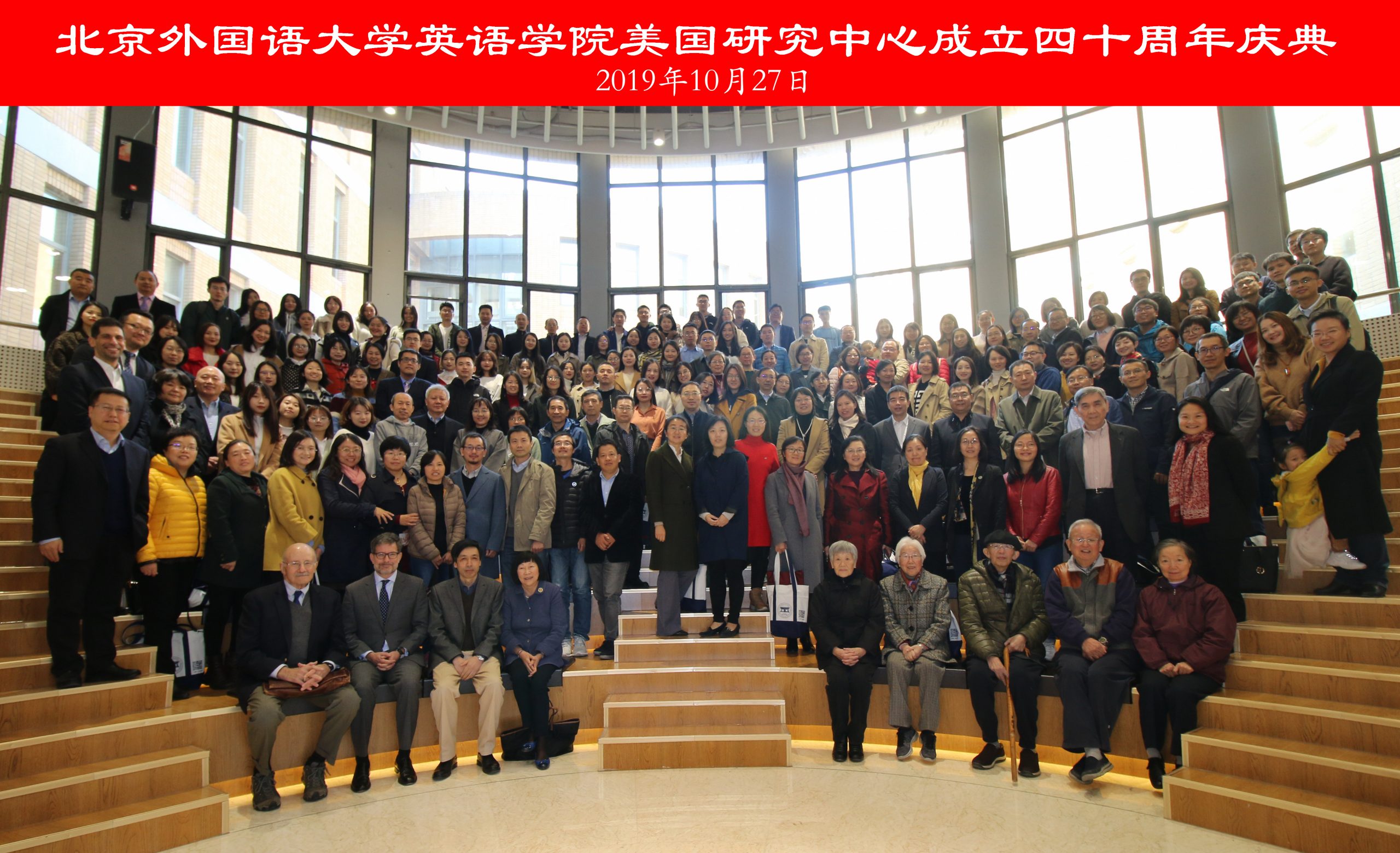 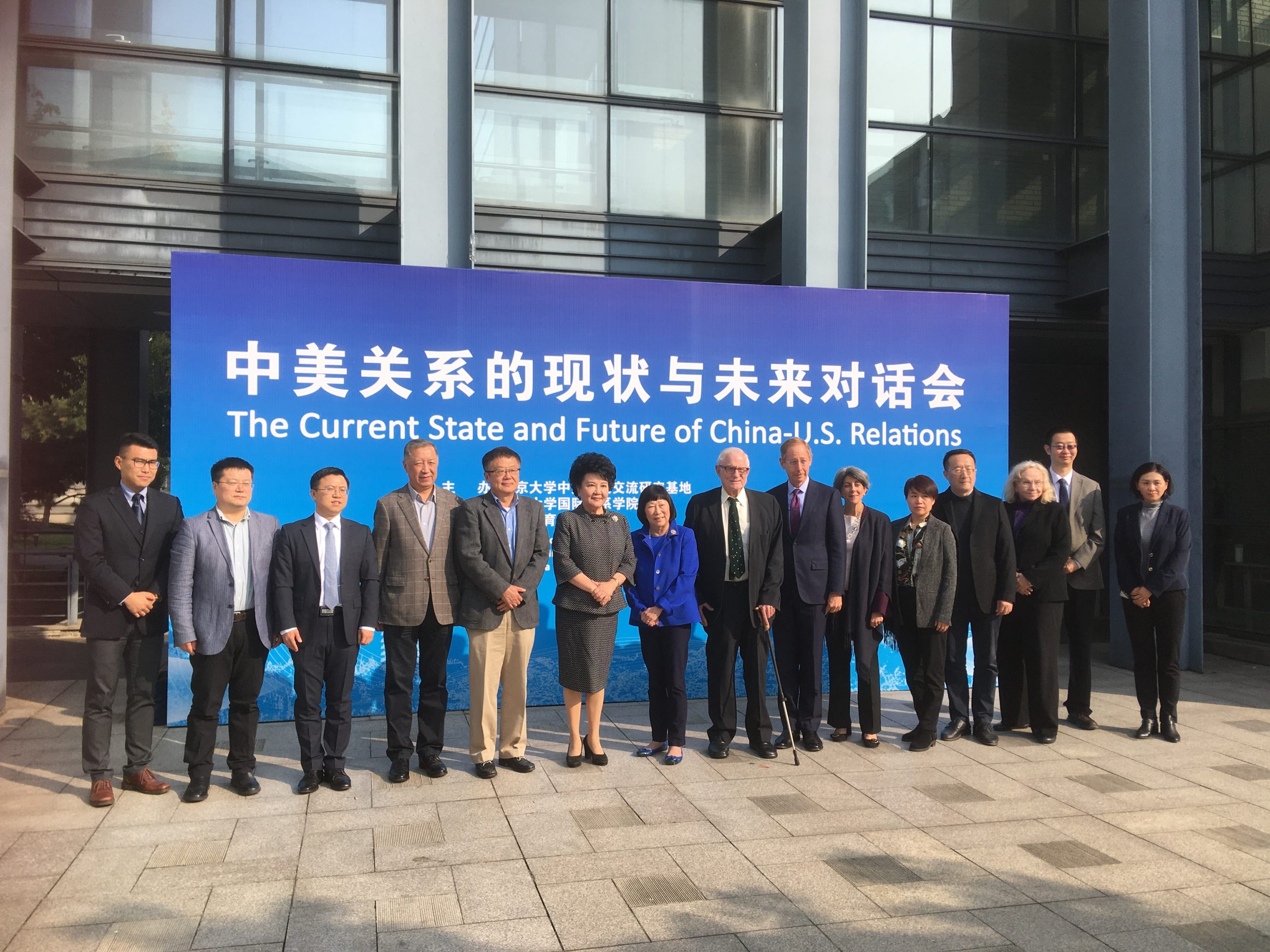 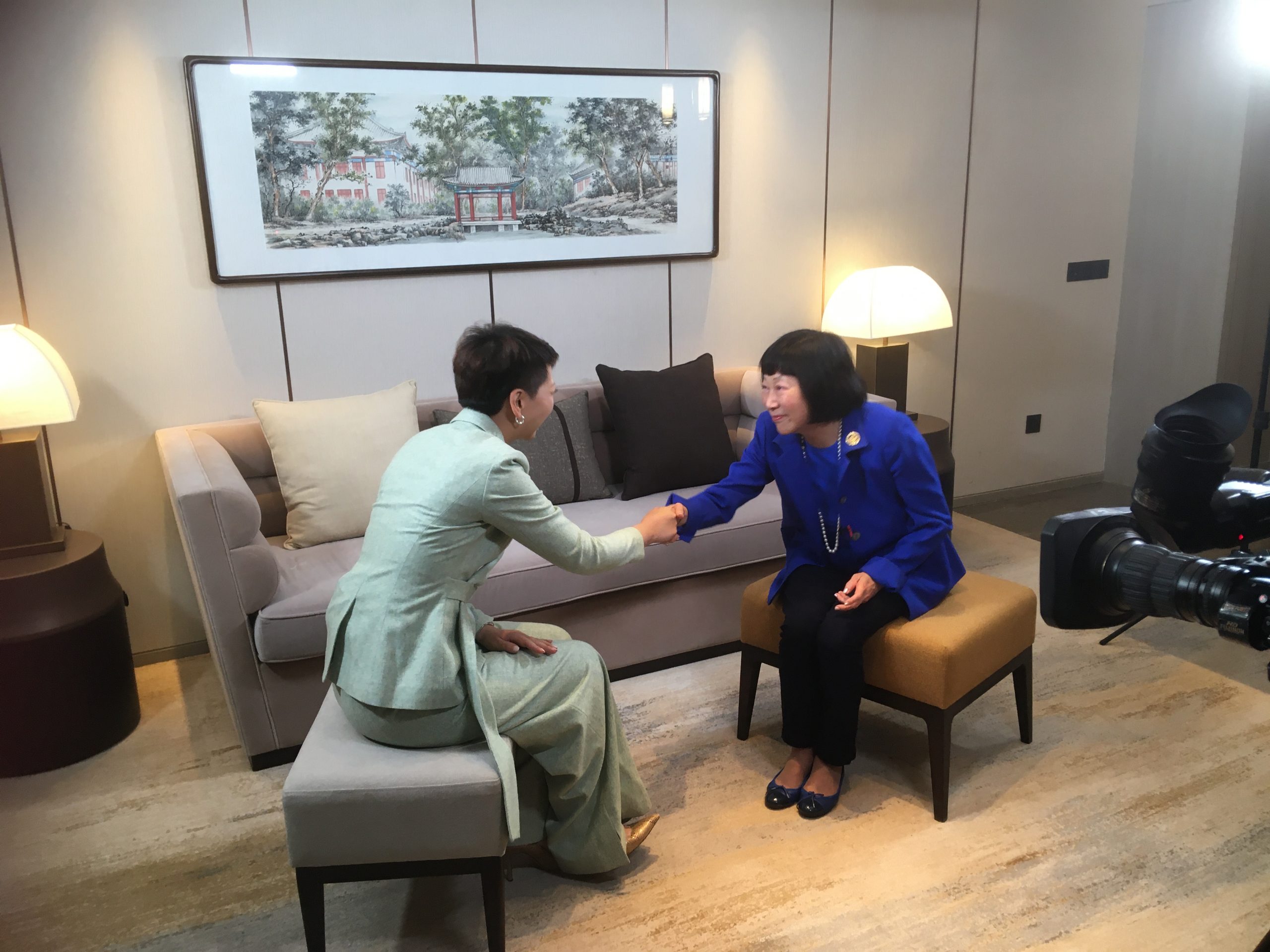 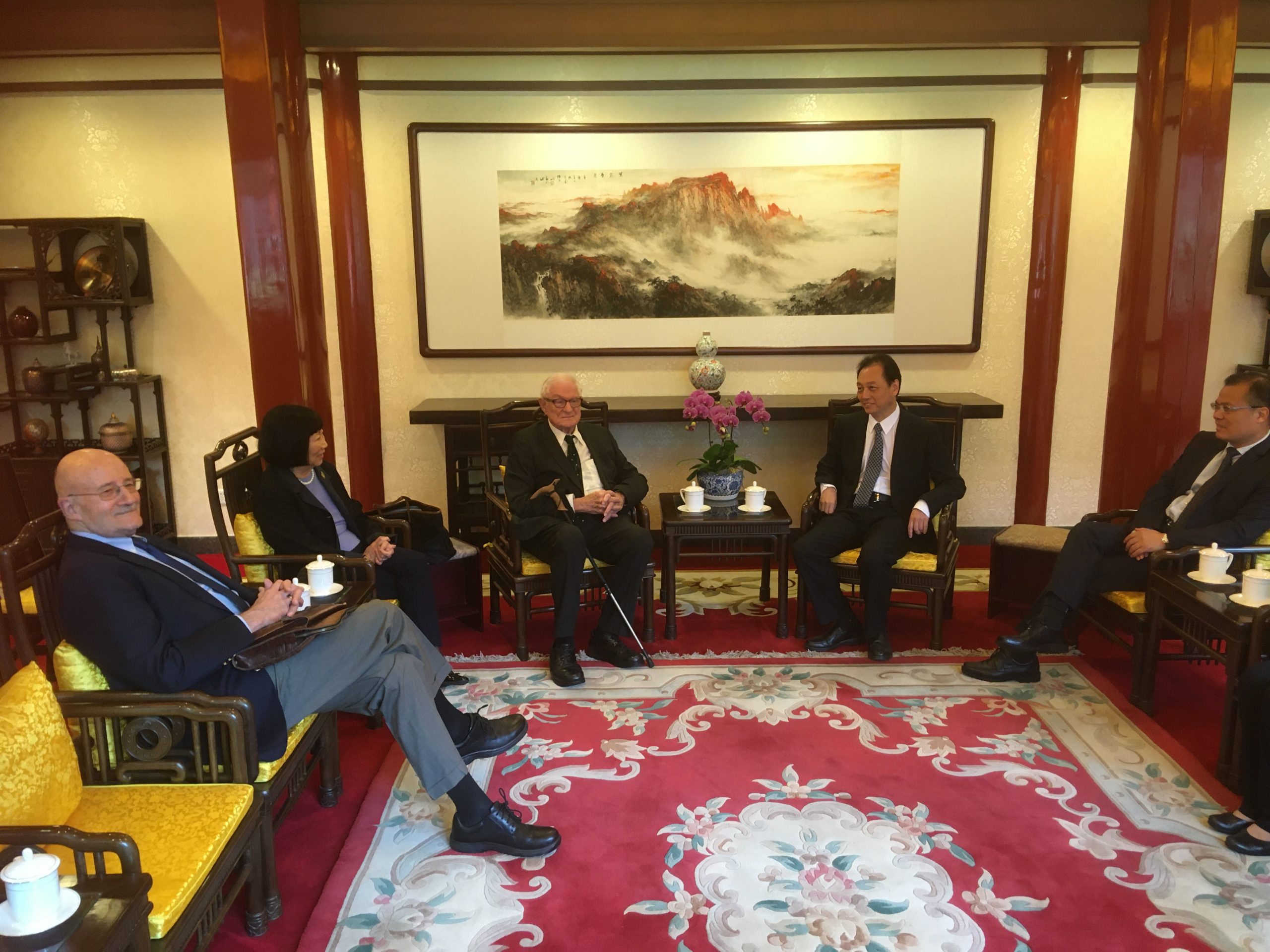 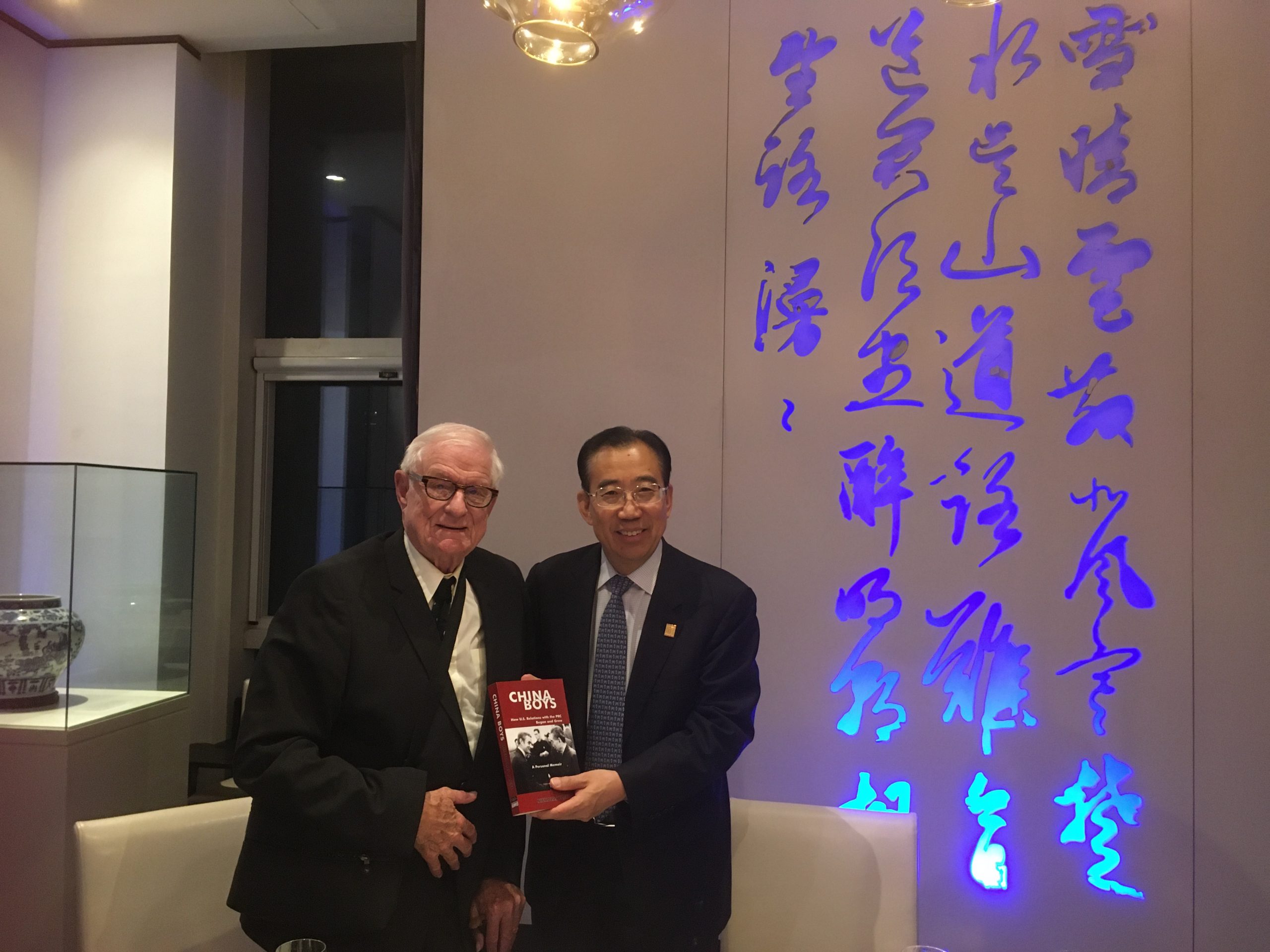